Zinedine Zidane reckons Gerard Pique is free to say what comes in his mind, but, winning while you are touring around the continent is itself a challenge, let alone the standard of the opposition you get to play. 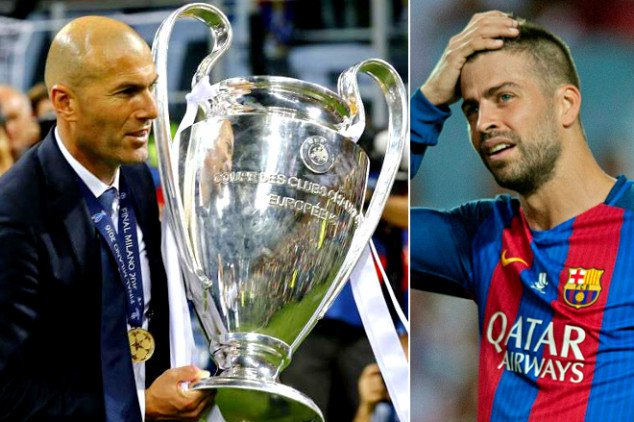 Pique, while responding to someone’s question on social media, had hinted that he didn’t rate the triumph of the Whites in the continent that high as he reckoned they went untested, both through the group as well as through the knock-out phase.

Pique had elaborated in his reply that Madrid did not have to lock horns with the champions of any of the European leagues, not even the Runners up of the leagues at any stage. The team they got in the Round of 4 was Manchester City which was the lowest placed among all the Premiership teams qualified to Europe.

Pique is someone who has triggered intense verbal battle between the two bitter rivals in the past, but, Zidane chose to be an iceman on this occasion and didn’t react ferociously at Pique’s swipe.

Smiling wide, the Frenchman said, “We all know what it takes to do it in Europe, but, obviously there is no ban on expressing your views, different people, different views; it’s okay.”

“He probably believes his side is the topmost in the country and to say that after clinching the League, which his side has done, is not unfair to be honest.”

“However, no team is carrying anything from that season. It’s passed, part of the history books. It’s all zero for everyone now and everyone is in contention. We aren’t the only two sides competing. Many other decent sides are competing too.”
“We have had our preparation. Let’s see if we are able to change it at the top.”